“By drawing the horror I experienced, by writing the tragedy I had to endure, by bringing it to the stage in city theatres, I transform suffering into a beautiful occasion, useful to society.” 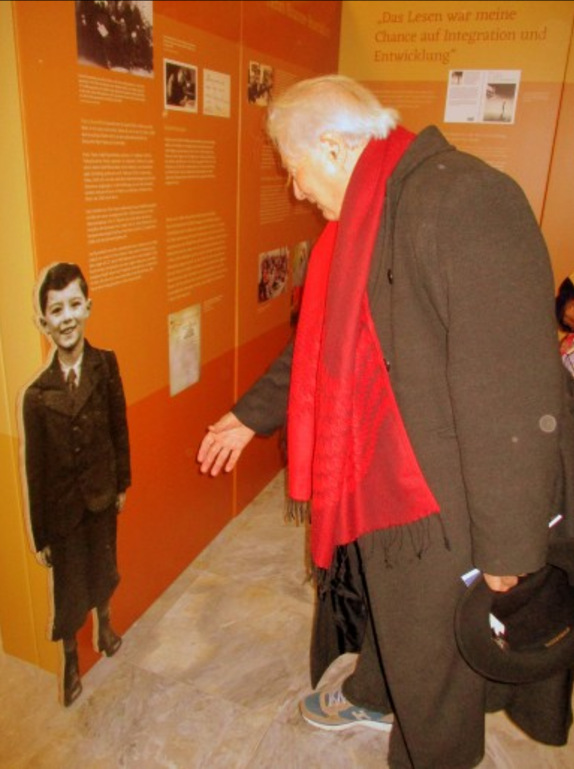 “80 years ago, in March 1939 – I was almost 7 years old – I made a stopover here in Cologne. I was on board a “Kindertransport” that was taking me from Vienna, my city of birth, to Brussels. I travelled alongside 125 other children, escorted by helpers of the Red Cross.

I don’t quite remember it exactly but the kids coming from Austria like me, presumably got off the train and were taken in through different locations of the Jewish community, perhaps the school Jawne, in order to be regrouped with others coming from different German villages (Berlin, Bochum, Cologne…), before eventually leaving for Belgium.

While I can’t recall that stopover, I do remember strongly, however, the event that was the reason for my exile: the “Anschluss”.

For the Joyous Entry of the Führer in Vienna on March 15, 1938, I remember I wasn’t even 6 years old yet – I experienced it an attic. A neighbour, a member of the Nazi Party no less, warned my mother “Jews will get hurt today”. He had nevertheless taken the risk of offering us shelter.

It was at the top of a building close to the Heldenplatz where Hitler held a speech. Cradled in my mother’s arms, terrified, I heard the cheers, anthems like the Horst Wessel Lied and the cries of the Sieg Heil salute by which the mob expressed their adherence to the cult.

I can still hear the marching noise of the stamping boots of the SA, the brown shirts, their war chants, a phrase, followed by silence for four steps. Another thing that has stayed with me is marching rhythm of the Hitler Youth, parading to the sound of drums: two slow beats, dum-dum, followed by three beats in quick succession, dum-dum-dum…

The vexations and bullying the Jews had to endure – boycotted or plundered shops, senior citizens forced to sweep the pavement with toothbrushes, professors, doctors, and officials chased from their jobs… – had proven themselves to be but a general repetition of the big pogrom precursor of the Shoah, the Kristallnacht on November 9th-10th, 1938.

This exhibition commemorates the fact that after the emotions this sanguinary night provoked and under the pressure of notable English Jews, Great Britain agreed to take in an unlimited number of unaccompanied children.

The Belgian government showed itself to be less generous. Between the 2nd and 8th January, 1939, the Belgian border police refused entry into the country to about 70 unaccompanied Jews.

The Minister of Justice, the Catholic Joseph Pholien justified himself in terms which, in hindsight, sound even more scandalous:

“The German authorities turn a blind eye in favour of the Jewish exodus. We complained to the government of the Reich and, on October 22, an accord was signed by which Germany has promised to no longer favour immigration into our country.”

The press’ reaction was fierce, letters and telegrams of protest were addressed to the government which was also put under pressure by the Committee of Assistance for Jewish child refugees, created in November, 1938.

In Mid-January, 1939, Joseph Polien announced that the door would be open to 750 unaccompanied Jewish children. I was one of those. I owe it to misfortune that I was lucky enough to have been selected with priority for a Kindertransport authorised to enter Belgium: the internment of my Dad, one month after the Anschluss in Dachau, before being transferred to the camp in Buchenwald.

I strongly remember my departure from Vienna as well. The day before, my mother had taken me to the Prater Ferris Wheel for the first time. I remember the scenes of desolation at the station of West-Bahnhof Wien.

You can easily imagine how torn Mother was, as were all those parents, cornered by multiplying antisemitic persecutions in Germany and Austria and forced to send their children away, alone, to strangers in countries that were as unknown to them as the language spoken there. All without certainty of seeing them again one day!

The distress these children, feeling abandoned, experienced; I tried to describe it in a novel 6 years ago that will be adapted into a film next year:

“The train from Vienna to Brussels passed through an endless black tunnel. The lighting of the compartments was inoperative and fading. Flashes of blinding light broke the darkness when passing unknown stations where the Kindertransport slowed down or stopped. Night time accentuated the worrying nature of the noises: speakers crackling the name of a place or signalling the passage of a convoy of exiles, the hissing of locomotives that were supplied with water, rail workers hitting rods with hammers.

The children were crammed onto wooden seats of the 3rd class wagons, some dazed, some incessantly crying, and others still calling for their fathers or mothers. Nurses tried to calm them. The ice-cold compartments smelled of pee and poop. At dawn, the train made a longer stop just outside the Belgian border. Voices shouted. “Papier Kontrolle.” Police officers or Gestapo men in civilian, sporting armbands with swastikas, eyeing these kids like criminals on the run…”

After arriving in Brussels, I was comforted by the warm welcoming of a couple of Belgian Jews, David and Fanny Dorn. I was also reassured by the reunion with my uncle, Sam Rosenblatt, my father’s younger brother, who had fled Austria in time to find refuge in Belgium, before making it to the United States. It was him who convinced the Dorns to offer me shelter.

The following events unfortunately constitute a known story: Very quickly, after my mother thought to have got me to safety, the Nazis caught me in Belgium in May, 1940! I lived through the continuous rise of antisemitic measures: the banning from jobs, exclusion from public places, deprived of going to school and the brand destined to stigmatise us, the Yellow Star.

On September 3, 1942, a few months after the Wannsee Conference took place to work out the Final Solution of the Jewish Question, we miraculously escaped from the raids that rid multiple districts of Jews. The house occupied by my family was situated at a little square behind a main road and the Germans neglected this detour.

From this moment, my story became one of multiple variants of the ledger of Hidden Children. The friends within this circle, Marcel Frydman, François Englert, Adolphe Nysenholc, Hélène Szleper, who were also hidden children in Belgium, could all in their own way, tell you tales that are both alike and different, extraordinary stories of survival…

As for me, just before the letter, Marthe Van Doren, a brave Catholic woman without any political engagements if not those of the heart, agreed to hide me, at the risk of her life, in the backshop of her cleaning and dyeing warehouse in another district of Brussels.

Barred from going outside and any contact with other children, the only distraction I had was listening to the radio and reading.

Marthe, all but illiterate, randomly borrowed books from the communal library where she couldn’t disclose that she was sheltering a child. Thus, between the age of 10 and 12, I read, in no particular order and without always fully comprehending, [Victor] Hugo and [Honoré de] Balzac, [Georges] Simenon and [Arthur] Conan Doyle, Max du Veuzit and Daphne du Maurier, [Charles] Baudelaire and [Stéphane] Mallarmé, Spirou and the BDs of Tintin in the magazine “Le Soir” in service of the Nazis!

Without a doubt, I owe it to this uncultivated woman that I later became a journalist, film maker and writer. I also owe her my professional pseudonym because Henri Roanne was the fake name written on the ration card which she had managed to procure for me!

As we’ve seen, organising the Kindertransporte, which led to the evacuation of more than the thousand Jews from the Reich, was thanks to solidarity movements in England, Belgium, and some other countries. The scale of those protests and endeavours completely undermines the argument that many Germans were unaware of the circumstances surrounding the Jews, a fate that was nevertheless announced as early as 1924 in “Mein Kampf”.

It makes the silence of your grandparents and great-grandparents even more thunderous. In large part they were, if not perpetrators, certainly accomplices, through conviction, through conformism or through cowardice before the ruthless antisemitic hunt orchestrated by Adolf Hitler.

Don’t hold this uncomfortable and painful reminder against me. But as a secular Jew, I cannot accept that it is dangerous or ill-advised to wear a kippa in modern-day Germany. As many among you I suppose, I am frightened by the images seen on television, rallies in multiple cities of the country, thousands of militants from the extreme right, arms stretched, who forget, minimise or deny this past and go as far as wanting to reclaim it.

The crimes of Hitler’s Germany, the generations after the Second World War are of course not responsible for any of those. However, as a survivor thanks to the Kindertransporte, I dare to say to your face: upholding democracy, rejecting tolerance, the struggle against fascism under the disguise of populism is the responsibility of you, Germans, more than it is of any other European citizen.

This so significant exhibition inaugurated here today, the remarkable work of research undertaken by volunteers from the Centre of education and commemoration Jawne does exactly that. You contribute, without a doubt, to re-establishing “the lost honour of Germany” by not contending yourselves with proposing a memorial for the past. You are not satisfied with merely dwelling on old stories: “Safe…for a while” is an enlightening work and an indication of something akin to whistleblowing.

Your exhibition confronts us with current events: immigrants fleeing from terror and misery, rejected everywhere, religious intolerance, racial discrimination, children torn away from their families in Germany and all of Europe, in Africa just as in America…

Even more so than before, we can no longer pretend that we didn’t know…

After having shared all these emotions with you, I would like to add one more thing.

Today, is a great day of celebration. We are here today, we survivors, François, Adolphe, Hélène, Marcel and a few others, we are here among German friends, we survived, we started families, we have children, grandchildren, great-grandchildren, we have written books, have made films, we have even won Nobel Prizes!

We have won, and in the future we will win against those that wish to repeat this evil and sinister past.

It is a great pleasure to be here today! Thank you to all who have made it possible!